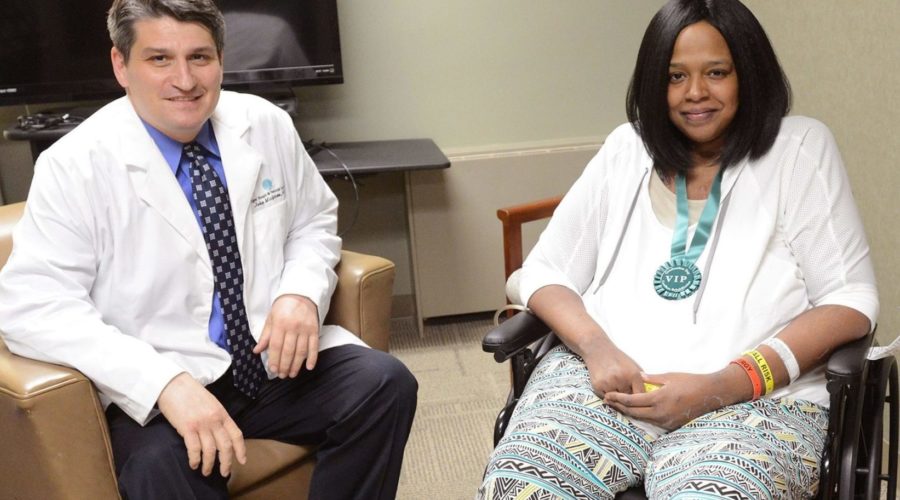 Danielle Gaither was nine months pregnant when she walked to the hospital this past February with contractions and trouble breathing. Her chest was hurting and she was not sure she would make it.

“I thought I was dying. I couldn’t believe it,” she tells PEOPLE.

Doctors sprang into action and quickly realized they would need to perform two surgeries at once — delivering her baby via C-section and then performing open-heart operation to save mother and infant.

“They were very close to dying. We had to act quickly and we had to function as a team,” says Dr. Jeko Madjarov, the cardiothoracic surgeon with Sanger Heart and Vascular Institute that handled Danielle.

Gaither, who lives in Indian Trail, North Carolina, has Marfan syndrome, a genetic disorder which affects the body’s connective tissue and can result in high-risk pregnancies. When she arrived at the hospital that day, the main artery for her heart had torn, cutting off the blood supply to her and her unborn child.

Her body was shutting down — and quick.

“You think you’ve seen it all and something like this happens and that’s what medicine is all about,” Dr. Madjarov, 49, tells PEOPLE. “Usually one to do one process first and then follow with the next in a day or so, but in this case, we had to do everything at the same time because they both could have died.”

A team of 15 doctors and nurses worked for six hours and saved both mother and child.

Danielle, who spent months in the hospital recovering, was not able to see her baby because they were both at risk for disease.

“I remember the first time I saw my baby — he was 3 months, it was a joyful moment — it brought happy tears to my eyes. I didn’t know he was going to be this big!” she recalls.

After five months at Carolinas Medical Center in Charlotte and another couple weeks in rehab, she was finally able to go home in late July.

Gaither already had three kids before having K.V. and says now she savors time with each of them even more than she did before.

“I do not take life for granted and I really like every day of my life. All of my children are a blessing,” she says. “It’s a miracle that I had them all and I thank God for my life and that I have and that I have all healthy kids.”

And she says she’s actually looking forward to going back to the hospital — to thank all the doctors and nurses who cared for her.

“I want to thank Dr. Madjarov the most — he saved my life and he stuck by me”.

Madjarov says he expects Gaither to make a complete recovery.

“This situation has brought me such professional satisfaction…essentially moments like this make me proud that I make the right decision going into medicine,” he says.