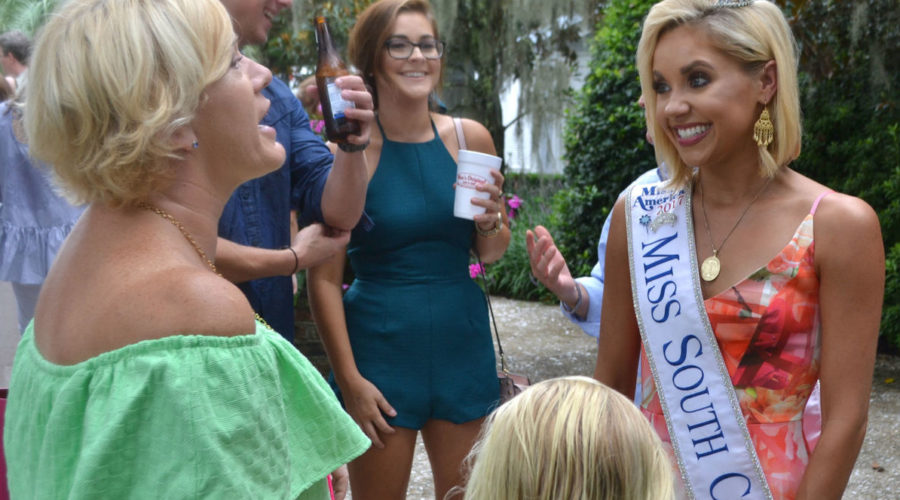 Megan Herlong Parker, a former dance teacher and a choreographer in Litchfield Dance Arts Academy in Pawleys Island, educated Roberts from 2003 to 2005. She was one of about 200 people who braved the heat for a sendoff dinner event at Caledonia Golf & Fish Club on Aug. 13 to wish Roberts nicely as she travels to Atlantic City, New Jersey to compete in the Miss America Pageant on Sept. 10.

She said that she is not at all surprised that Roberts is competing in the Miss America Pageant.

“Suzi has been focused and passionate and strong-willed in the best possible manner as a young age,” Parker said. “She’s always been a hard worker and she just pushes through everything that comes her way.

She also shared information about work she has been performing based on her platform, “Child Advocacy: ensuring the rights of every child.”

“I’ve been working with the South Carolina Department of Education a lot and a few of the things we are doing is trying to promote the national interests of the Miss America organization in South Carolina for the children of (the state),” Roberts said.

She said she’s focusing on urging young women to get involved in the Science, Technology, Engineering and Math programs in school so they can prepare for tasks with industries like Boeing and BMW in South Carolina.

“So, we are working on some advertising techniques to get women, especially young women, in elementary schools across South Carolina introduced to STEM at an early age,” she said.

The sendoff event featured food from Moe’s Original Bar B Que and The Rustic Table, cakes from Publix and Incredible Edibles and live music from The Fourclosures and Lana Guy.

It was also a chance for people to donate to Robert’s fundraising effort for the Children’s Miracle League hospitals. She raised about $5,000 between the Caledonia event and another event at Custom Outdoor Furniture in Murells Inlet, according to her mom, Mariah Johnson, bringing her total to about $35,000.

“We’re thrilled,” Johnson said. “She’s now the best fundraiser for the state and she is hoping to keep going and win the title of Miracle Maker.”

Roberts is also working with the Department of Education, the Children’s Trust of South Carolina and the Institute for Child Success to get adverse childhood experiences screenings in every early childhood care facility in the state.

“So, that ties directly in with the Children’s Miracle Network hospitals, ensuring we have adequate health care and preventative health care in South Carolina based on their experiences,” Roberts said.

She thanked people for donating and said money donated will not visit the national program.

“It will stay right here in South Carolina and help kids in our own communities,” Roberts said.

Roberts grew up in Pawleys Island and left at age 12 to enter private ballet study in Houston, Texas. She attended the University of Texas, moved to the University of South Carolina, cheered for the Atlanta Falcons and then chased beauty pageants to eventually compete for the Miss South Carolina title. She’s now living in Columbia and plans to attend law school at USC in the Children’s Law Program to pursue a career that goes along with her child advocacy platform.

Her father, Gary Roberts, is a partner with Coldwell Banker Chicora Advantage and broker in charge of the South Strand Commercial District. Her mother is a member with RE/MAX Southern Shores. Roberts also has an 18-year-old brother, Hampton.

Some people who attended the sendoff event in Pawleys Island knew Roberts and some did not. Kathy Redwine of Pawleys Island said she doesn’t understand Roberts, but she knows she is supportive of children.

“I know she has a really wonderful platform for children,” Redwine said. “I am a huge supporter of anything that’s about children and figuring out how we can help them be more empowered.”

She brought her 7-year-old daughter, Kalin to meet Roberts.

“I thought it’d be a great point to bring her and give her a chance to meet Suzi,” Redwine said. “I think it’s actually awesome that we have someone in our little neck of the woods with the ability to do so much and be a voice for others — for young women and children.”Paige McKinney of Murrells Inlet also brought her 7-year-old daughter, Sophia.”I just brought my daughter here to see somebody from the area going out to possibly be crowned Miss America since we might not see this again for quite a long time,” she said. “Suzi is setting a great example for young women and it is great to see someone succeed from this small place.”

“I am just here to wish Suzi the best and hope she does well and brings the crown back to the Pawleys Island area,” he said. “That would be fantastic for Suzi and everyone here.”