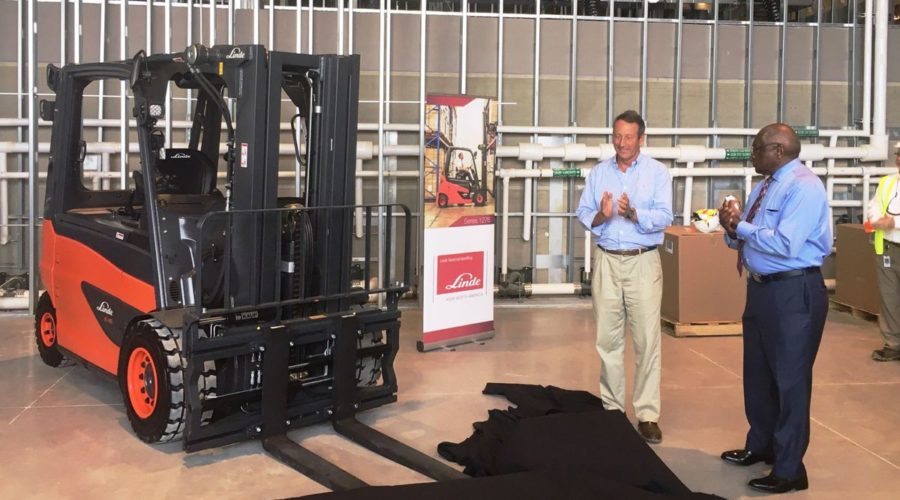 With construction of its Berkeley County production campus more than 75 percent complete, Volvo Cars on Thursday said it will be the first U.S. automaker to use forklifts with lithium-ion batteries in its production process — part of the provider’s “green initiative.”

“One of our core values is environmental and this fits right in there,” said Katarina Fjording, Volvo’s vice president of manufacturing and purchasing and the individual responsible for building the $500 million plant off U.S. Interstate 26 near Ridgeville.

The forklifts “are a small piece of that puzzle.”

Volvo is going to be the only U.S. auto manufacturer to use forklifts powered by lithium-ion batteries, which are 30 percent more energy efficient than regular battery-powered models. The forklifts will be reached in neighboring Summerville by KION North America, among the world’s largest providers of industrial trucks, forklifts and tow tractors. The company signed an agreement in January to supply material handling equipment for the Volvo plant.

Vincent Halma, president and CEO of KION North America, stated the lithium batteries will let Volvo operate the machines for up to 24 hours without a recharge. That will allow the forklifts to be applied on multiple shiftsThe lithium-ion batteries also charge about eight times faster than traditional batteries. “It is more efficient, it’s safer, there is no need for a charging room and you don’t have to change batteries,” Halma said. “It’s the next generation of material handling power solutions.”

The building structures at Volvo’s 1,600-acre website, a portion of the Camp Hall Industrial Campus, are almost complete, and the automaker now is installing inside machinery for the highly automated plant. Volvo expects to make its first newly redesigned S60 sedan for sale to the public about one year from now, Fjording said, adding the company will soon announce a second vehicle to me produced in Berkeley County. That vehicle would not begin production until 2021.

“We are doing procedure installations now, which means robots are going in, and we are even trial running a few of the processes,” she said. “Last weekend, we fired up some of the robots — they were live.” By the beginning of 2018, the Lowcountry site will start producing painted test vehicles as Volvo ramps up a manufacturing process that will make approximately 60,000 cars each year. About 60 percent of those vehicles will be exported through the Port of Charleston to foreign markets, with the rest to be sold domestically.

Volvo hopes to hire about 2,000 employees to work two changes by the time automobiles start rolling off the assembly line for the general public. The business has tentative plans to double its workforce in coming years depending on market conditions. The local plant, initially announced in 2015, would be capable of creating any automobile made on Volvo’s new car platform that surfaced with the all-new XC90 SUV.